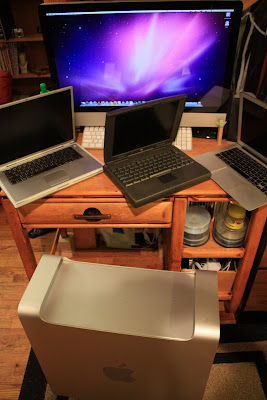 In 1994, My parents bought a Macintosh Performa 550. During the next 17 years, Apple products would help to shape how I view the world as well as myself. I teach computer science at Stuyvesant High School in Manhattan, and I use my MacBook Air to do everything from taking attendance to developing a 3D renderer; The first time, and only, time I waited on line for a product was to get my hands on the iPhone 3G; The first computer I purchased on my own was a Power Macintosh G5; The first time I realized that packaging could be (almost) as beautiful as the product itself, was while unboxing my iPod (3rd generation); The first time I ever looked into the guts of a computer, both the hardware and software, was on a PowerBook 1400; As for that Performa 550, my most vivid, early memory of using a computer is sitting in front of the 14 inch screen and using the included CD-ROM encyclopedia to watch a video first Moon landing, over and over. I can still see the grainy images framed by the black and white borders of a system 7 window. It was the first time I realized that the computer was more than just a device to play Oregon Trail, that it was a gateway to a whole new world of possibilities.

Steve Jobs' vision for technology, or at least what I have perceived that vision as, centered around the following core ideas: It should be put in the homes (and now hands and pockets), of everyone, it should allow people to experience and impact the world around them, and it should never get in the way. The Performa showed me a world beyond my own, and now the Air helps me inspire the next generation of innovators to, as was stated in that famous ad campaign, "Think Different".

Thank you Steve, for everything.